By David DixonJanuary 28, 2016On the Road with the LGA
No Comments 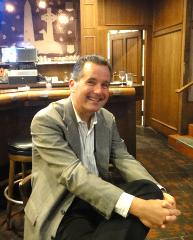 What image do people outside the core group of Civil War enthusiasts have of the typical round table club? This is an important question, as such impressions may largely determine the ultimate health and success of these organizations in the today’s fast-changing social landscape. In the early 19th century, fraternal orders like the Masons and the Odd Fellows were a vital part of the social fabric of most every city of any size in our nation. Many of these chapters are now defunct. Membership, in many cases, has dwindled for decades.  A related question is: How is interest developed among those who have never attended any of the thousands of CWRT monthly meetings occurring every year?

My demanding business career over the past 35 years compelled me to operate on the fringes of the American Civil War community, publishing a few articles each year on topics that interested me. I never ventured into the inner circle of CW buffdom. Now that my first book is out, I am faced with delivering talks to more than a dozen such clubs over the next several months. I began this rite of passage for most serious authors in the genre with more than a little trepidation.

I am not a military historian. Having never attended a round table before last fall, I imagined a small, monolithic assembly of ancient white ex-military men arguing over the miniscule details of this troop movement on that day of a particular battle that their ancestor happened to fight in. My perceptions began to change when I started visiting CWRT websites. Numerous clubs have an excellent and informative presence on the web. Speaker lineups often include not only books on battles and tactics, but also a wide range of topics, from wartime politics to slavery to women and the home front.  Other sites seem to be stuck in an older paradigm, are not terribly visitor-friendly, or lack variety in their program topics.

On January 21, I gave my first talk of the New Year at the San Francisco Civil War Round Table. I must admit that as an outsider, I had low expectations. Their website is adequate, but still probably ranks in the lower half of the CWRTwebsites I have surfed. Patrick Doyle is the president of this group and the meetings are held at the United Irish Cultural Center just steps from Ocean Beach. Early arrivers at the cocktail hour made me feel welcome. Despite their greetings, I was apprehensive. My book does have two chapters concerning military campaigns and battles, but if this crowd was looking for bold new perspectives on Perryville and the Battle of Stones River, they were in for a big disappointment.

I need not to have worried. Once I met a the members it became clear to me that this was no motley collection of old school Lost Cause adherents and testosterone-infused military strategy wonks.  The men and women of this fine club were from every conceivable background. A number were accomplished authors themselves. A well-known local singer and actor attended as a guest. There was no shortage of advanced degrees in this crowd. I got the distinct impression that these folks had a lot going on in their lives that did not revolve around the Civil War. It is San Francisco after all.

I believe that diversity is one of the recipes for the SFCWRT’s success. The program director, Bob Hubbs, does a nice job of bringing a wide range of speakers on many different topics to this club – no small feat, given the accomplished constituency he serves. Table talk in my corner of the room went in many different directions, including local history, film, and other arts and entertainment subjects. At times, it felt more like a colloquium than what I expected to be a narrowly-focused discussion. My audience was attentive and enthusiastic, and the questions were probing and thought-provoking.

Many CWRTs are embracing change in terms of technology and recognizing the value of diversity in membership and programming. Others, I am afraid, may be left behind as new generations of adults experience an avalanche of leisure options, both virtual and attendance-based to enhance their lifelong learning. The SFCWRT seems to be on the path towards a 21st century club model that really works, despite being so far away from the major battlefields of our great national struggle. It will be good to watch them grow and prosper.